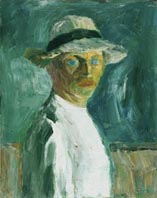 "Whether in watercolors or oil paintings, Nolde is distinguished by a very particular quality of color, which his friends in Die Brücke and the Fauvist painters do not have. Nolde's romanticism, or his "romantic expressionism" (Itzhak Goldberg), his conception of a nature inhabited by the divine, resides in large part in this character of color. This color is not identified with the surfaces it occupies, but creates on the surface a whole world of breaths and echoes, a veritable chromatic storm. As for the woodcuts, the favorite domain of all the German expressionists, those of Nolde are distinguished by the density of the black, which seems gorged and streaming (one would be tempted to say sticky) with its own light."
Manuel Jover, Art Absolument n°26, September 2008