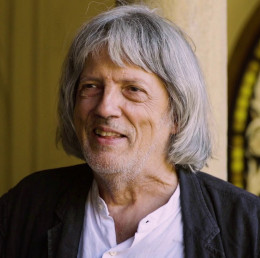 There are two ways of presenting Luigi Serafini. The one that consists in repeating the answer he gave a few years ago in an interview: "Sono un satrapo della patafisica, ovvero la scienza delle soluzioni immaginarie", in other words: "I am a satrap of pataphysics, or the science of imaginary solutions. " This is confirmed on the page preceding the printing of his book The Beginning and End of Civilization, the sixth volume of the Optimatic Library published by the College of Pataphysics, where it is stated: "Luigi Serafini is a satrap of the College of Pataphysics." The other way to define him is to say that he is a jack of all trades.