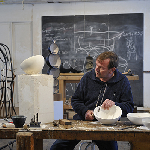 Sculptor, engraver, illustrator of bibliophilic works, he worked mainly wood. Axel Cassel grew up in France, studied law at the Sorbonne and then enrolled at the École supérieure des Beaux-Arts in Paris with a special interest in graphic arts, He had been living in France since 1969. He settled in a Norman village where he established his family house and his first workshop. Married to Malgorzata Paszko, painter of Polish origin. Axel Cassel, who died in 2015, was in the image of his sculptures;
Imposing, disproportionate, of a formidable strength countered by an almost unthinkable finesse of the execution. Axel Cassel had the ability to materialize his dreams in a concrete, obvious form; he managed to humanize the unspeakable.
It is a very singular and striking personality, indispensable in the world of art.