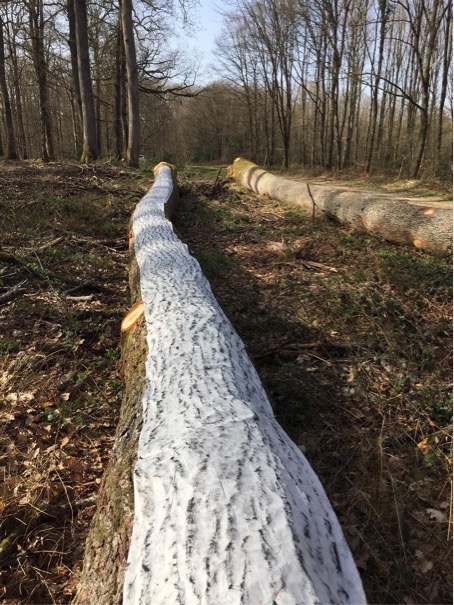 Constance Fulda. From one forest to another.

This summer, the monumental prints of the bark of the oaks destined for the reconstruction of the Notre-Dame's framework, made by the French artist Constance Fulda, will take place on the buttresses of the Synodal Palace in Sens and in the Orangery of the Senate in Paris.

It was nicknamed "The Forest". In April 2019, the 13th-century framework of Notre-Dame de Paris was reduced to ashes by an accidental fire that took with it more than a thousand centuries-old oak trees. Two years later, in preparation for its reconstruction, their successors were carefully selected from the French forests. It is in their last moments before the logging that the artist Constance Fulda comes to visit them and takes a last print of their bark, as if to accompany them in this transition, to keep a raw trace of their own identity. As a tribute, the two exhibitions will be an opportunity to reveal, through these vegetal and perennial testimonies, the majesty of these oaks in all its extent.

A friend of trees who thinks of herself as an intermediary, Constance Fulga carries out an almost scientific research work, full of humility, meticulous and sensitive: equipped with washi paper, a fine but resistant Japanese paper, and a roller impregnated with black acrylic paint, the artist takes down these different prints with the idea that the black and white patterns that appear on the paper are the means for the trees to write their history.

Constance Fulda, From one forest to another. Orangerie du Sénat, Paris and the foothills of the Palais Synodal, Sens. Summer 2022.